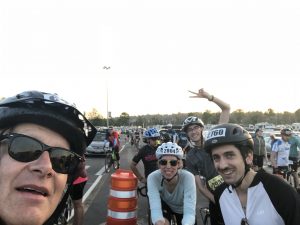 I had planned to write up our little adventure yesterday but I had a severe case of acute carpal tunnel. It took me both hands to squeeze eye drops into my eyes!

There were moments of extreme sublimity. Shortly after the start, riding along Lake Washington, cool in the morning with the sun rising over the lake. Just lovely. Riding through Madigan Army/McCord Airforce Base – no cars. The occasional soldier. Firing ranges. Mt. Rainier popping into view from time to time.

And the camaraderie was a beautiful thing. Rode for awhile with a great dude from California who was riding with his father-in-law. There was this neat group – neon green – from the Philippines. They’d done it every year since ’06 I believe. Once they did it in a single day. Jacob, from Seattle, whom I met in Centralia, the halfway point.

Day one was straightforward. Mostly flat. The much vaunted “big hill” out of Puyallup was a bit of a dud. Sure, it was long but not very steep. And there were these lovely women in tutus at the top who were dancing for us! Ha. And the rest of the day was very flat.

I broke with my group early on. It wasn’t anything planned. It just happened. And pretty soon, I was well in front of them and I just kept going, didn’t stop except for water once. And arrived in Centralia at 12:36, 6 hours and 50 minutes after I’d started, an average speed of just over 15 mph inclusive of breaks.

Mat and I spent the night in Olympia, at the Townhouse Suites, strategically located on Capital Blvd where the Lakefair Grand Parade was underway. Weird mixture of small town Americana and some serious multiethnic stuff which I suspect was a result of the rapid growth of immigrant populations into rural areas to help with farming.

Sunday started out auspiciously enough. We got going around 5:40. Rode through Chehalis, and on towards Castle Rock. Flatly and lovely. Got our first shots of Mt. St. Helens. And then the rolling hills started. We crossed the Columbia and then rolled in. Hot, hot, hot. Started feeling the pain in St. Helens – just a general fatigue – with about 25 miles to go. But we did it. And the youngsters want to do it again. As for me, and as you can see below, I’m done.